In June 2019, Wardin Wamba, after his annual return from Congo, launches two “white woman” masks of the kind used in kifwebe dances in south-east Luba.  At first I do not notice the special quality of the version of a mature woman, because of a fresh and oversized bushy beard made of raffia straw. Later, Wardin bravely cuts it off, and the mask instantly transforms into a slender, well-proportioned mask body of the kind pleasing to the eye and depicted in Felix (“Luba Zoo,” see below). So, on the first occasion, I only acquire the version of a young girl who populates the world of traditional Luba female sculpture, one has to say ‘adultimately’. It is a typical dance mask: light, rubbed to a shine internally through the chin and skullcap of a slim dancer, with a view through three openings, and up to the top of the elaborate coiffure many practical drilled holes on three levels for fastening the costume. Wardin’s comment that the ‘Belle Madeleine’ mask appeared with the popular animal masks and his reference to “books and the internet” made me search Google Search and found what I was looking for. Here I quote a number from the random offer at ‘Google Images for …’, where my uploads also appear – always without being asked:

Description of young Madeleine One 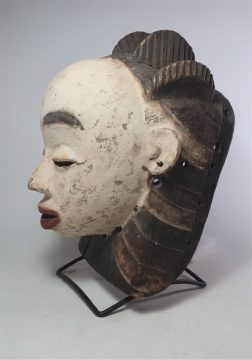 Actually invisible under the costume, the hairstyle sits on a collar typical of Kifwebe, which otherwise forms a slightly rounded right angle and is thus spontaneously reminiscent of pharaonic face masks from ancient Egypt.

The mask is composed for a long-distance effect and can certainly compete with a female Punu mask in direct comparison. I think I can imagine the corresponding dance performance. The ‘Madeleine’ is also a traditional village beauty.

I open the photocopy of Marc Leo Felix (occasional paper – june 1992) “Luba Zoo” and find on page 13 four masks with women’s faces, of which only one is numbered 32 on page 11. image documents 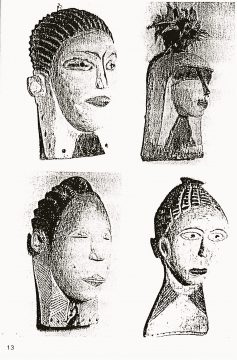 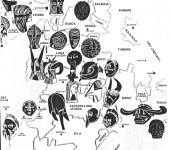 „In the south between the towns of Ankoro, Kiambi and Manono, some surprising and little-known types of rectangular white Kifwebes have come to light, one of which represents in a variety of styles and sizes the face of a European woman (ill#32 and on page 13). This type of mask is called La belle Madeleine and, according to local folclore, depicts a beautiful Belgian nun, who was said to have been the mistress of chief Noy – Informants disagree as to the date this „Masoeur Madeleine“ lived, the earliest estimate is 1930, the latest 1950. The Madeleine mask is now also used by a syncretic voluntary association called Baba na Mama of which the central figure of devotion is the Virgin Mary, and it also performs, in conjunction with a series of zoomorphic masks, a danced duet combining the beauty and the beast. This human/animal combination of masks is typical of southeast Zaire and can be found among the Tabwa and other Lubaized groups east of the Lake Moero area where a buffalo mask (ill#33) dances in combination with a female mask (ill#34).“ 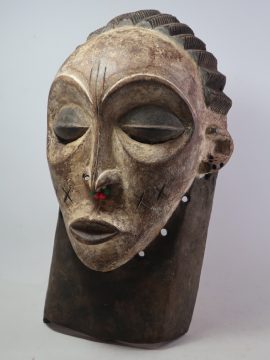 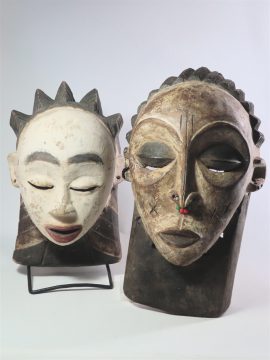 The second Madeleine mask is in type a mature, elegant woman with large eyes and sharp features:

Provided with pearl jewelry in the nose (spare) and on the earlobes (spare) And with incised decorative scars: crosses on the cheeks, next to the line on the bridge of the nose. A horizontal, raised edge in the middle of the heavy, black-colored eyelids (2.5 by 4 cm high) shades the eye opening and directs the woman’s gaze downwards in a ‘decent’ manner, but also inwards in a ‘meditative’ manner. Some masks or figures represented in catalogs show that this is considered beautiful among Luba. 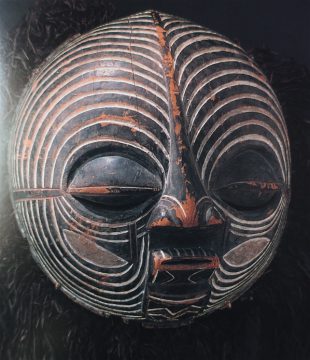 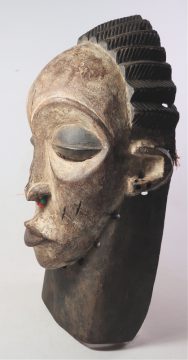 The profile is animated by the arches of the nostrils and the pursed leaf-shaped mouth; the lips appear narrow due to the contouring, but suggest a slight opening. The face is slightly larger than life with a height of 22 cm, appears somewhat splayed with a width of 18 cm, curves forward 14 cm deep from the rear edge of the ears, otherwise up to about 10 cm.

portrait resemblance? The striking facial features are so realistically adapted to the oval base that I immediately think of a portrait. The almost circular edge of the cheekbone centers the eye and can signal that the woman has passed the prime of her youth. The fact that the two arches of the eyes are unequal in size – the left arch 8.5 cm, the right arch 7.5 cm high – that the left arch is visibly larger and more prominent reinforces the impression of a portrait resemblance. Stylistically, this design could even point in the direction of Kasai (LINK), since the mask type of the “white woman” occurs everywhere south of the Sahara anyway: from the puppets of the Bamana to masks of the Baule, not to forget the widespread Mamiwata, as well as masked faces of the Punu in Gabon, or in the east with the Lega…..

In “Memory – Luba Art and the Making of History” (1997) illustrations allow a different interpretation: For example the field photo Fig. 170 on p. 186 by Mary Nooter Roberts 1989 : The attire of the soothsayers includes white a painted face, even specially highlighted white cheekbones around the eyes.

Of course, this woman’s mask has a ‘spiritual’ aspect, even if the masked performances by traveling dance troupes today essentially have entertainment value – and for children an educational value (LINK).

‘The White Woman’ is not as frivolous or ridiculous as her entrance perhaps might suggest, she is, as Zoé S. Strother learned among the Pende in 1988, feared as a powerful witch (LINK). The slight asymmetry of the face can also be seen as a suspicious deviation from the ideal of beauty. However, both halves of the face are perfectly balanced by the elegantly shaped and contoured nose with a fine tip and the thin lip line.

MADELEINE THREE : The Nun, the Angel 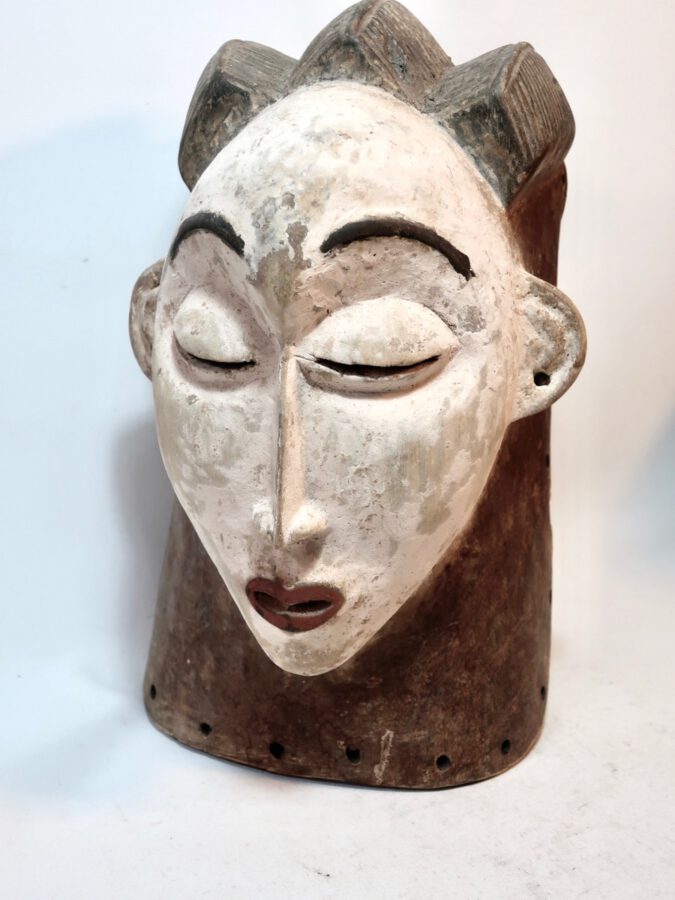 First attempt at a description

The smallest face of the three Madeleines, and the most perfect.

An extremely narrow, long bridge of the nose, which could have come directly from Modigliani, and delicate, sensitive nostrils.

A particularly small, slightly pursed mouth, one that would only be able to take in small portions, that just seems to breathe something, say the syllables of a silent prayer.

Compared to the other two masks, the cheeks are no longer childishly chubby, but they are not mature either. A shapely little facial skull.

The eyebrows are set high and seem less ‘grown’ than deliberately drawn artificially.

The hairline is set far back on the steeply tapering skullcap and is crowned by three large curls, the only adornment of which are regular, parallel grooves on the sides.

A face made up in pure white, from which a few elements stand out in three-dimensional or contrasting colors: the small red mouth, the oversized hemispheres of the half-closed eyes and their narrow, curved slits, the black eyebrows and the delicate ears with holes for (missing) earrings.

The wide, dark frame, which is clearly visible behind the ears and extends up to the hairstyle, IT suggests a Nun’s veil to me.

The eye slits, equally impenetrable from every perspective, give the face an extremely internalized expression. After all, I have trouble imagining a dance performance where the mask doesn’t come across as extremely forbidding and intimidating.

Note on reference to Modigliani:

If the “Madeleine” cult only emerged after World War II, there are better arguments for looking for foreign influences on the African artist. The ‘Asian’ appearance of the mask would also have to be taken into account. And the possibility of an idealized portrait.

Updated on April 7, 2022 from the Tribal Arts auction at Zemanek-Münster, Würzburg: Lot 290 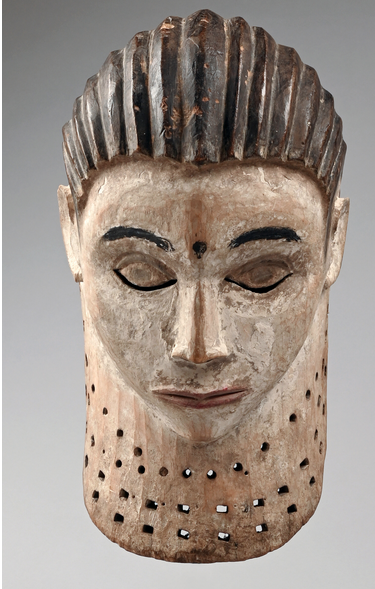 A classic model, undoubtedly the type of a ‘white’ woman – European or Indian – with a narrow mouth, again very individual, which does not diminish the idealization, because ageless, with an attractive hairstyle.

The dot between the eyebrows, which is black here, is striking and probably refers to the Indian custom of protecting women. (LINK en.wikipedia “Bindi”). The passage is supposed to “designate the energetic third eye”, or more precisely: It “is considered the sixth chakra and seat of secret knowledge in the Hindu faith”. The magical sign may have migrated from the Indian Ocean coast. “The bindi has a historical and cultural presence in the region of Greater India.[8][9]”

The magical meaning is reinforced by pupils painted on almost closed eyelids, an elegant variation on the double pair of eyes often found on Central African figures and masks. The three rows of holes on the white neckline, of which the lower two square-cut ones could have been punched sooner or later, remind us that we do not yet know the costume of this type of mask.

Why not a monkey, old chimpanzee or bonobo ?

I’m also looking for a representative partner to stage a double portrait that leaves the nature of their relationship open. The black long-discarded great ape mask fits better in its calm than a hyper-realistic and chubby-cheeked spotted leopard mask with aggressively gaping mouth. It is also carved in a different style and is also not from the neighborhood.

Note the forehead, the nose and the shape of the mouth. Convinced? 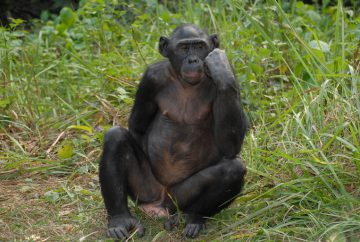 I now have four different types of “Luba” Kifwebe’s. The “Monkey” box is of the classic type, more so than the more elegant “Parrot”  or “Guinea Fowl” (not yet published) or even the heavily rounded pair of “Owls” (LINK). But it is just as unconventional as the other expressive animal depictions. Because the zoomorphic characteristics are not superimposed on an abstract striped box here either.

Modernization by a sect and popularization by Schlager “Baba na Mama“

Mwamba Wardin intones a popular song about ‘Madeleine’ in Kiswahili. But I want to know more about that. Under the keyword “Baba na Mama” You Tube offers video clips of soloists and choirs from the Congo, which sweetly celebrate family harmony and the blessing of the parents. This fits the sect’s name “Papa and Mama”, but the standardized scenes and choreographies of the soloists and choirs have no connection to the masked dances. We must keep looking! Would you help? 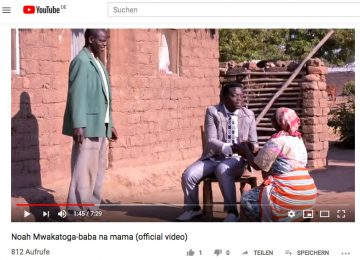