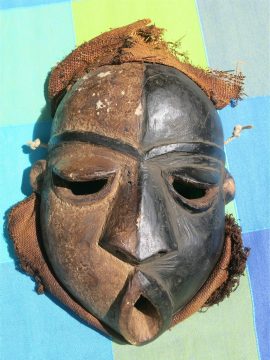 A thick board, according to Händler W. “the good wood”, generously hewn, roughly smoothed on the inside, but functionally smoothed, as functional as the wide groove between the eye openings. The area and position of the mouth also correspond to the carrying position. My face fits perfectly in the cavity. The slightly downward view is good enough. The back edges are slightly rounded and show some shine. The face of the mask also has no superfluous cutting, no unnecessary smoothing, the area covered under the cap, for example, can only be put on with a scissor. On the black right side, slight knife marks give the surfaces additional dynamics. Technically, the mask resembles a radical impatient dancer.

The context of the Mbangu mask

In his small but rich exhibition catalog “To Cure and Protect” (Berg en Dal,HerremanTo Cure and Protect no.11.no 1999) Frank Herreman presents three Mbangu. I reproduce here a relatively sober mask and translate the associated commentary, which of course leaves a few questions unanswered: “You play as a highly respected hunter who has been stricken with facial paralysis. this mask shows how even the most respected and upright member of the congregation can be unexpectedly stricken with illness. In this case, the Pende believe that the individual has been bewitched by a jealous rival. In the show, Mbangu dances with an array of characters, from clown to magician to whore. These masks teach the public about the rewards of good behavior and the pitfalls of morally weak people. The black and white alludes to the scars of a person who has fallen into the fire due to epilepsy or some other medical condition.” (Herreman to Strother)

Strother ‘Pende’ (2008) Fig. 18 “Masterpieces of Central Africa” ​​explains the performance in an object description: The Mbangu dances to the song “We are watching (unable to help), the wizards have bewitched him”. The Mbangu carries a backpack from which protrudes an arrow, a sign of the invisible projectiles of the sorcerers who hit the victim “unexpectedly”. The dancer imitates evasive and defensive movements, if he does not even use a bow and arrow himself. (p.159 to n°46 (Z.S.S.)) Zoé S. Strother, in “Inventing Masks – Agency and History in the Art of the Central Pende” (1998), gives another explanation, which makes the grotesque face of the mask and its reception with contempt and mockery by the public more plausible: if it’s around an asocial witcher who has lost control of his magical power: “Mbangu mocked the dangerous consequences of failure to control power to discourage the continuation of antisocial witchcraft” (297) Such a sinister theme, however, conflicted with the trend towards a masquerade that wanted to emphasize community and joy: a masquerade tradition emphasizing community and joy (297). So an ambiguous number. And sometimes the laughter got stuck in people’s throats. However, as social tensions increased, harmful magic increased. The capitalist economy since the colonial era has greatly upset the traditional rules of give and take between parents. If necessary, the elderly extorted money and labor from younger family members with the help of criminal witchcraft. The young people developed a strong feeling that they were exploiting them. Even in Kinshasa, they were not immune to the claims of their “uncles”. (297/98). New songs and new masks were specially invented to criticize him, and they had more or less success from 1953 to the 1980s (297-298). At the end, Strother writes elsewhere (see original quote below), “Mbangu was quite a rare mask when/since (since) I was there.” In the Bandundu region, so many people suffered from malnutrition that masked dances had not taken place since the 1990s.”

A vital interpretation of the type of mask

The guy is cast in the role of the cursed but combative man. The public expects a disfigured grimace. It also invites the sculptor to charge, cite various characteristics, caricature instead of realism. Here, on the other hand, we encounter a remarkably individual face. Not a standard nose, but a nasal bone that’s been broken relatively far down. The man received a punch, perhaps the cause of the downturned tip of the nose lies elsewhere. One often sees mouths set so grotesquely askew that unilateral facial paralysis cannot produce. And they are then an unmistakable sign in the lower half of the face. The clinical form of the disfigurement is not really fixed for the mask type. Here the lips are carved extremely wide and protruding, incidentally in harmony with the bridges of the typical eyebrows and the equally thick rims of the eyes. The mouth is reminiscent of operated upper lips (cleft palate). The mouth has become a funnel, screaming and attracting as much attention as the expressive eyes do. The face mask already embodies the narrative of the dance. Further indicators are unnecessary; it doesn’t need any conventional ingredients like pockmarks, prominent forehead bulges or crooked eyes. The conspicuously small ear cups make constructive sense: We see the face as it would appear through a wide-angle lens: the close is too big, the far too small. We know this as an unpleasant side effect of effective digital cameras.

I come back once more to the crudeness of the technical design. I learned from Zoé Strother (particularly in “Inventing Masks”, University of Chicago Press 1998 – Link) that dancers must work together as clients and craftsmen. And that prominent carvers demand prices that exceed the possibilities of dancers who have not yet established themselves. Who came together in this case? Or even more radical: Did the young man carve the thing himself? Or a friend who learned the trade from kibitzers alone? Or did it have to be quick? Zoé tells the story of a talented newcomer who made a song out of his frustration, secretly performed it to his friends and developed a dance with them, and improvised his face mask with the simplest of means in his first performance. And then I look again at the mask lying on the floor and say to myself: that wasn’t a beginner! And as the layers of kaolin repeatedly painted over show, it has stood the test of time over the years. The raffia surroundings should have been renewed. The wood is intact, but the smell has almost completely disappeared.

Let’s take a look at the glory days of ‘authentic’ provenance:

Strother emphasizes the fact “that the 20th century Pende sculptor has always been fully integrated into the world market. Its production belonged to a mixed economy, with works intended for both Pende connoisseurs and anonymous foreign dealers.” “Gabama a Gingungu and the Secret History of Twentieth-Century Art”, African Arts. Spring 1999, pp. 19-31: p.29) She has noticed that the legendary ethnographers Leo Frobenius (1904) and Emil Torday (1909) acquired Pende objects before they even set foot on their territory. Torday bought from the Compagnie du Kasai headquarters in Dima/Bandundu, at least 575 kilometers downstream on the banks of the Kasai River. “Pende masks circulated as commodities with standardized prices.” (30) European commissions for masks enabled distinguished sculptors to ‘professionalize’ themselves, earning a modest living from this alone. As is well known, the Belgians had instituted a money economy, collecting what they called “taxes” and what the Pende called “tributes”. (28)