When five tattered and dirty canvases appeared at the flea market last year, it was clearly their last stop. The trader didn‘t give up his inflated price; he preferred to use the scraps a few more times for decoration. Now the flea market is dead and the trader is being stuck in Africa. Will that be their end?

A prominent publication for reference

However, they resemble more the works of the street painter Tshibumba Kanda Matulu . In the Seventies, Anthropologist Johannes Fabian happened to meet him in the streets of Lumumbashi (Katanga)  and commissioned a bulk of paintings for an illustrated ‘popular’ history of the Congo, interviewed the painter extensively in Kiswahili and finally published a hundred pictures with Tshibumba‘s explanations edited and translated by Fabian, some in form of short dialogues. They were discretely ’confronted‘ with severely shortened results of Western historians.

“Remembering the Present – Painting and Popular History in Zaire“, UCP Berkeley, caused a sensation after 1996 as a methodologically pioneering project that oscillated between ‘ethnography’ and ‘African art history’. In an editorial in RES magazine (vol. 39, Spring 2001, pp. 5-23), Zoé Strother criticized the compromises made by Fabian and his book designers as “anxious encounter”. –

For the non-specialist reader of the book it is crucial that in the sequence of colorful pictures no coherent historical panorama is created, neither with the arbitrary selection of scenes, nor with the picture and text information. The result of this collaboration is – in printed form – reminiscent of the format of oriental storytellers and morality singers, who once presented legends of ‘Great Alexander’ with the pointer and naive paintings on Persian marketplaces.

Genre pictures with various themes were made in Katanga between 1966 and 1979 (Strother p.10) and were acquired by locals and Europeans as room decorations. Tshibumba was unable to maintain his new standard of living after the foreigners left. He had no license as ‘peintre’ anyway. His trace is lost on the diamond fields in Kasai (Jewsiewicki 1999, ibid.). 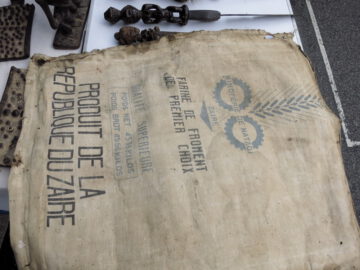 As evidenced by the used and stamped sackcloth, the pictures of the Frankfurt flea market came from the province of “Bas-Congo”, at the Congo estuary. The port city “Matadi” is specified.

Tshibumbas picture No. 34 for comparison

The published explanation for painting No. 34 is typical of the modest supply of the street painter. The peintre-artiste Tshibumba commented on the picture as follows (Fabians version pp.68-69:

“The colonial period was a time of servitude. They put people in prison and beat them with canes. Yes, they were flogging people in prison. It wasn’t like it used to be in the village when you had transgressed and they would grab you and beat you. In prison, the flogging was like paying a fine when you had done something bad. The flogging took place during roll card. It could happen that you were in the lineup and did not quite understand what the supervisors said. Then they would beat you with a cane.”

In the interview, the place name on the police building is explained as follows: There are many of these paintings and it just so happened that this was the one I sold to you. Others have Kakanda, Sakania, Lodja, Matadi – I could do all the districts or towns of Zaire because there were prisons in all these places. (…) No, that’s not a village /in the background/, it’s the police barracks. It is close to their place of work. Every policeman had his job. One would wake up all the prisoners in the morning …. Another is pursuing a prisoner who is trying to run away from the flogging and the prison. “Get him,” the policeman shouts “he’s taking to the bush!” Another policeman is making a prisoner undress to make sure he is ready when the roll call comes and he will get his flogging. (…)  “They are carrying shit” (…) “because when people are in prison the doors are locked and they relieve themselves in an vat. ” (….) TPM? “It stands for “travaux publiques ya méchanisation “Public Works and Motor Pool.

These two are wives of prisoners. They are there because they brought food. “Let’s bring them a bowl of food and a bottle of water in the morning,” they had said, and then they found one of the husbands being beaten. Here you see his wife as she puts her hand on her cheek, in a gesture of distress. And the other one is sad, too. We do not know which of the prisoners is her husband.

» Smoking his pipe. And then you see the policeman with his ID number. Because when the Belgians ruled, each policeman had his badge number.  (….) If he caused you trouble on the road or asked for money, you would just take down his badge number and go away to report  him to his superior…. He would be called in and be made to face the charges.

Each period of time is represented by a typical characteristic: 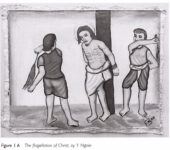 The pre-colonial period due to the traditional sensitive punishment, which was associated with standing on the shame post and loss of honor (document in Knops: “Senufo” (before 1938); on the post on this popular painting Christ stands in the same curved posture (Fabian Fig. 1.6) like the Senufo at Knops, but is currently being flogged. He is a white like his tormentor. The copy after a Belgian illustration? (for context see Pierre Petit: “Our Lady of Congo – Early Missionary Propaganda Devotion”: LINK to pdf Material religion vol. 16, 2020 no.2)

The colonial era with the extreme spread and banalization of the corporal punishment, which – should not be forgotten – was an accepted disciplinary measure, especially in Europe until the 1960s, in any case towards delinquents and in the ‘education’ of the youth. In the colony, blows were an integral part of foreign rule (servitude). Surprisingly, the artist also emphasizes two other aspects of colonial discipline, the orderly placement (barracks) and the at least theoretical possibility to appeal against abuse of office. We think like Fabian of a colonial myth, even if the claim only would relate to the last thirty years of Belgian colonial rule.

The Mobutu period may provide an element of indirect criticism, based on the widespread experience of police arbitrariness and corruption.

Tshibumba sets figures in different sizes like detailed and neat, and sharply contoured embroideries on a soft watercolor background, .

The canvas “COLONIE BELGE” by “Kiki” reproduces the obviously classic scene in an more atmospheric manner, with fewer details in a wider format  with central perspective. Some elements are missing: the barracks and the name of the police station, but also the removal of the toilet tub. A carrier row replaces the escape scene at Tshibumba’s painting.

Which topic of contemporary history is presented here by E. Mutombo?

I cannot yet explain the inscriptions “Prison du T.Mweka” and “1914-18” – not with help of Google, nor literature. The representation in Kiki’s style is becoming special by connecting the flogged person physically to two other chain prisoners . The snake-like shape of the chain is that of an Arab slave caravan (shown by Fabian in Figure 1.7 in a picture by L. Kalema). The delinquent is not undressed as usual. The identification mark of prisoners is seen on his shirt. Indications of a figurative sense?

SECOND SCENE “Chai Moto” – For a living room or a shop? 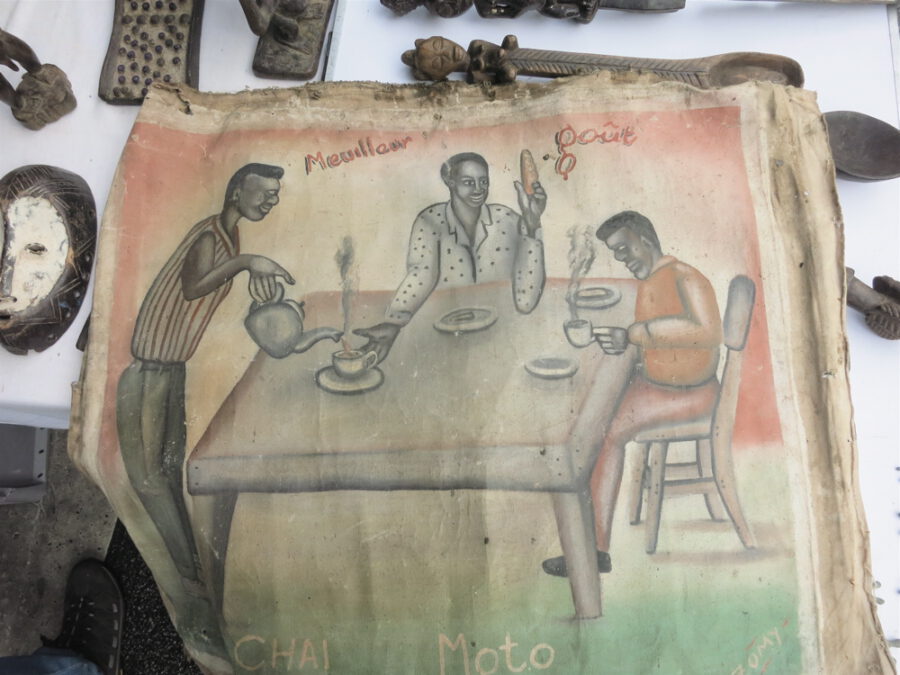 Migrant workers, factory workers, miners or dock workers in a factory accommodation? What have they achieved in life? Modern clothing? Tea in the cup? “Chai Moto – the better flavor”? – A song „Chai Moto“ and a feature film from Bongo Movie with Jennifer Ngendi (LINK) are online.

THIRD SCENE – RIGHT AT THE BACK (click on the picture!)

It looks like a proverb saying for example: You save yourself of the crocodile on a tree where a snake is already waiting. (I‘ve seen a reference picture somewhere)

Consequences of alcoholism are exposed, here around an illegal distillery. The uniformed men are being in a raid. I do not see police violence here. By the way, Chéri Samba painted comparable excesses of drugs in an urban setting. (“Cheri Samba” Trickster p. 60).

Popular education or social criticism? „Independence“ – For whom? What for? To get drunk? The river is named “Sankara”, the inscription clearly consists of two parts. . Captain Thomas Sankara was the president of Bourkina Faso and murdered in 1987. He was also regarded in the Congo as the “rebirth of Patrice Lumumba”. (LINK to “Assassination of Lumumba”, Ludo de Witte p.180) 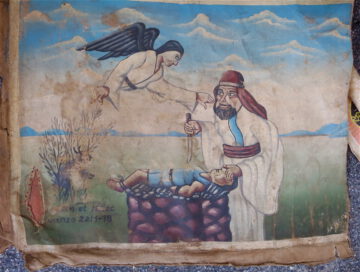 The message could be: Trust in God! There is also a precedent for a desperate situation. God is not angry. He’s just testing your obedience. – I’m thinking of statements by Kinois in de Boeck’s essay “Dancing the Apocalypse”, for example by ‘Vero’, a follower of the Eglise Evangelique Libre d’Afrique. (1999, LINK)