Designed 9.5.16 while reading by Wyatt MacGaffey and Kajsar Ekholm Friedman, revised on 5.5.2019

I would like to recall a few insights, because Europe’s understanding of the African societies is getting worse, as result of the moralization of ‘political correct’ speech! Compared to that, the attitude of the early sailors was downright open and curious. 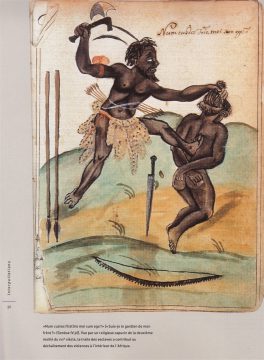 Vellut: La Mémoire du Congo – Le temps colonial, Tervuren 2005 p.36: “Am I the Keeper of my Brother?” (Genesis IV.9) – Drawing of a Capuchin friar from the second half of the 17th century

I want to underline an old but ‘buried’ knowledge: The Atlantic trade, as an economic motor, fueled a hardening of social tensions through blatant materialism in the centuries before Colonialism, on the slave coasts, at least at the mouth of the Congo River. Elites were able to accumulate wealth (slaves as an investment) by submitting poorer families whose origins were questioned or who were involved in witch trials, etc.

Power and authority paid off, and clan chiefs and wizards joined forces. And, above all, wealth could be shown through human sacrifices, in costly burial places etc., as Wyatt MacGaffey describes. (LINK) Only then occured the catastrophe of the Leopoldine “Congo State.” (Kajsar Ekholm Friedman / LINK)

I wonder whether the large number of perfectly crafted prestige objects in the Mayumbe and Vili region result from that trade economy. They were ordered from trendy artists. Each wife of a chief needed a little classic ‘mother’ representation ? (‘Maternité’, LINK) They imitated some ‘court’ style. I see in them mainly ‘attitude’, often only ‘pose’. Oh that idealization of the ancestors! The elites on the slave coasts were they more than witty ‘Krautjunkers’? Social domination never improved anyone’s character!

The reconstruction of a lost pre-colonial life in Africa today demands archaeological methods and attitudes. For a long time European ethnography could produce little more than masses of objects and rumors of hearsay, comparable to what the historians of the victorious Ancient Rome spread about Celts and Teutons two thousand years ago. The usual oral tradition of ‘plastically malleable myths’ (Michael Oppitz) conveys anyway a crooked image of ‘traditional’ order and gives the recent history a disproportionate importance; and that also affects the perception from outside.

The idea of a timeless brutal and miserable Africa went well with an ideology of progress dominant until the late 20th century. It happened already during the post Opium Wars to China (after 1842). Various ‘character masks’ of Europeans appeared on the colonial stage: the missionary, doctor, researcher, military, engineer, bureaucrat, journalist and businessman. They used the opportunity for their special interest. The hypocritical emancipatory rhetoric of today’s political Europe is not far off.

The fashionable idealization of African spirituality after one century and more of foreign domination can be understood by the need für ‘identity’,  but we should not forget about that the unresolved long-term conflict between new and ‘traditional’ elites, who often had for too long made their profit from Transatlantic Commerce.