Brother Couturier regrets the role of the Catholic mission in the destruction of pre-colonial culture, but has more to say.

A wonderful book. It flew from France to Texas in 1989. No stop-over in Germany. Where did I get hold of it then? In Norbert’s antiquarian bookshop?

This stylization does not appear as an end in itself, as mannerism. And in the essay Trop Tard (Too Late,1951) it seamlessly turns into an apology for the destruction caused by European colonizers and missionaries. 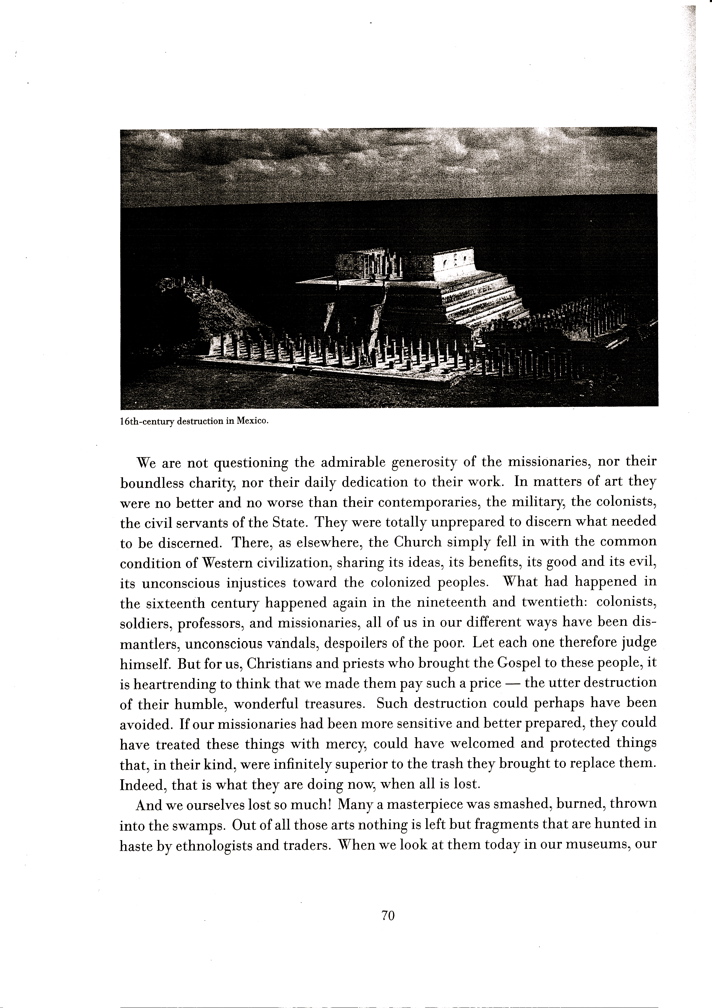 Couturier appeals primarily to his brethren, the clerics of the Catholic Church, and accordingly in the pose of humility. Reading his appeal, I think of all the the ghostly kitsch in hideous church rooms that I come across on holidays, especially in France. Explicitly Couturier limits his criticism  to the aesthetic side of spirituality, but he adresses ‘us’ and ‘our’ crimes against foreign cultures. His reasoning leaves no doubt : his brethren are ‘barbarians’ who don’t recognize spiritual culture in what is supposedly foreign and must destroy it.

We are not arguing: it may be that the faith could not be spread except at that price. (67) He repeats this one more time. But the price‘must have been too high. A pledge of guilt for crimes against culture – at that time actually unthinkable – seems indispensable to Couturier, although he uses the phrase But…. as basically a secondary matter: But it is important that we know and declare the value of what we forced these peoples to give up. Treasures of the poor, true treasures of the native soul, they were the witness and warrant of its dignity – its astonishing and pure flowers. (67)

Of course there is an idealization in this. He tries (72) to prevent such a reproach:… these arts of fetishists and witch doctors could also, from the depths of their spells and their darkness, have taught us a lesson (72).
He is clearly taking sides already in the concept of ‘the poor’.  Are ‘poor’ not those who according to Jesus of Nazareth ‘the kingdom of heaven belongs’, especially the ‘poor in the spirit’? And then he sharpens his confession of guilt again: But for us, Christans and priests who brought the Gospel to these people, it is heartrending …  the utter destruction of their humble wonderful treasures. This destruction could perhaps have been avoided. If our missionaries had been more sensitive and better prepared, they could have treated these things with mercy, could have welcomed and protected things, that in their kind, were infinitely superior to the trash they brought to replace them. Indeed, that is what they are doing now, when all is lost. (70)

This is no immature playing with foreign beliefs picked up somewhere, like Carl Einstein in his aesthetic party program (LINK). In the name of the injured human dignity of the colonized, Couturier does not want to interfere in their religious and magical matters. He registers the traces of ‘civilized’ vandalism and loss for humanity and appeals (1951) to pause, perhaps to reverse what for ‘clerics’ shouldn’t be so difficult after all.

And at the end – between two extremely attractive creations by oceanic artists – he gives a formula with which he tries to grasp their aesthetics:

Complex realities in which everything is mixed together, the forms of art with those of believe and life, and beauty with evil. Confused realities, in which really good things are everywhere present amid  the disorder of thoughts and mores. (74)

I see it as the formula of unconditional love for people. After all, too late could mean renouncing the dubious claim to bring the gospel to these people (70). But what has happened has happened: The onward movement of civilization is irreversible. (72) What remains a mystery to me is that Couturier fears 1951 that the spell cast by Matisse and Picasso will dissipate more radically than anything else what little is left of the primitive arts. (72) – Was Einstein wiser on this question? Or was the monk so impressed by the late abstraction and the kidney table in neighboring Germany?