A provisional translation from German original (LINK), by DvG 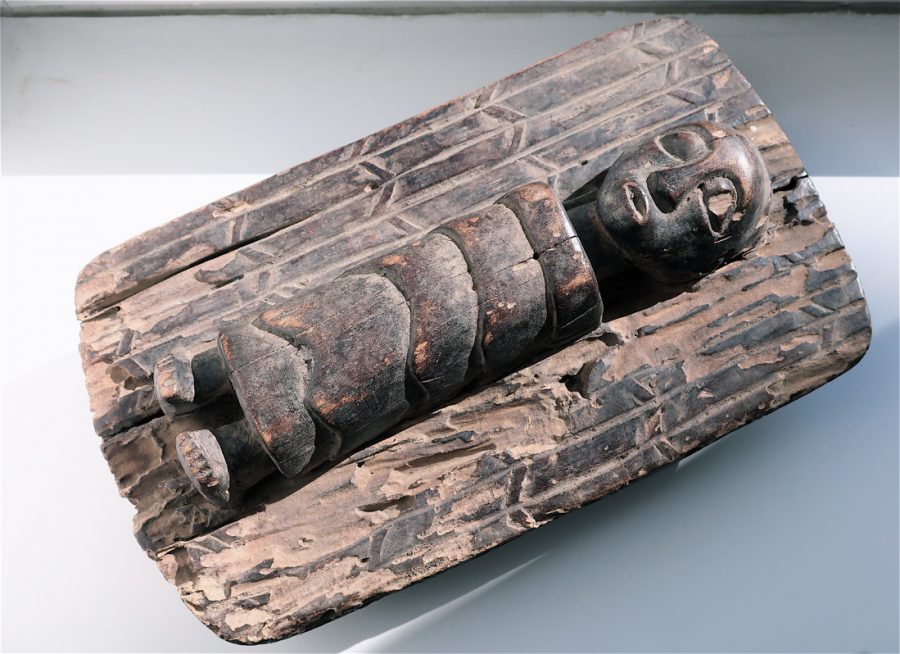 Origin ( Songye?) and significance were unknown to the trader. Origin might be of minor relevance, he said.  But the person has a strong charisma, regardless of the feeding marks, so it’s a work of art! Care and abrasion over a long period of time let the undamaged parts of the surface shine discreetly. So it has been a cult object!

The figure lies completely flat on a bed with four wide feet, on a mat, with wattle as a simple decor. The 2.3 cm thick side edge of the bed is decorated with small geometric patterns.

The head looks ‘Luba’ to me:

The arched forehead, the straight ‘shaved’ hairline – the undamaged of the ears is clearly visible. A flattened nose with a wide bottom, a protruding slightly open oval mouth of the same width and large eyes with even heavier eyelids than usual with ‘Luba’ figures. The lids are tightly closed, the damaged eyelid enhances the effect in its own way.

On the torso, which is wrapped tightly like a mummy, the torso, divided by four notches, looks mighty like armor. The small feet are completely vertical and parallel, draw our attention to themselves through their notches and intensify the impression of immobility.

A “deep sleeper” or already “a laid-out corpse”?

An African figure is supposed to embody something like strength, will, action, etc. This should also apply to symmetrical frontal representations. As I know depicting death is ‘taboo’.

I also do not know what use such an object could have, especially not in the funeral, where the spiritual power of the new ‘ancestor’ is vividly felt in all its ambivalence and where ritual has to lead him away from the living.

Could this head and body mean a healer’s therapeutic ‘shamanic’ journey, his temporary absence from his body? Eric de Rosny introduces his experience report from Duala with a therapeutic session in Duala. ( “The eyes of my goat – On the trail of African witchers and healers” (Title translated from German edition at Trickster 1999).

“I am being led to the door of a room where, as I am told, something will happen. A lean, rather tall 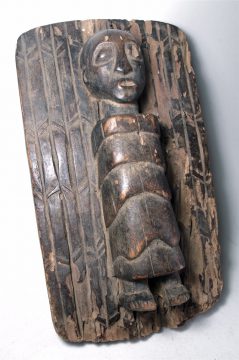 man lies on a bed with his eyes closed. (…) The man is dressed in a long red shirt and with a brightly colored hip belt that is knotted at belt height and hugs his legs like a shroud. I recognize Din, the master who allowed me to come. At first he remains immobile. The color of his skin is pale, the nose looks dead. I have to look at his chest for a long time to be sure that he is still breathing. Next to his head are two small straw brooms with elaborately crafted handles. (…) Very soon I feel exhausted and go back to my seat in the back yard. Now my neighbor sends me the following explanation: “Yes, I too saw Din or rather its physical shell, because in reality it has moved far away from us, in a westerly direction, to be precise to Mont Kupé. It is there that the person he is going to free tonight is being held captive. Damage wizards, it is said, let them work for them on notorious plantations. (…) It is Engome, the woman who lies on the left, ten steps away from us, right on the wall. She looks like she’s here, but her real self is still on the peak, unless Din is just leading her back. ”He explains all of this to me in a still, polite, and quiet voice, like I would explain a Christian ceremony to curious Buddhists. (S.12 / 13)

Later that night, Din is in the yard, leading Engome to the center of the crowd. “Under our eyes they will end their long journey; Engome, she is almost sticking to her liberator’s back, holding his waist with both arms and hugging him tightly. Din rushes with this woman, who pulls one leg and clings to him, the free space in all directions and as quickly as possible to prove that the escape was successful”. (P.15)

The events take place all night long. “I am unable to adopt an appropriate posture: if I cross my legs or feet, someone immediately comes to open them and align them in parallel. (P.16) The Catholic priest and ethnologist de Rosny has many questions, for example whether the young woman will soon be well. He mimickes her limp in question. Din laughs “and asks me to ask the bystanders about Engome’s condition a month ago.She was still very bloated and almost completely paralyzed then. ”(….)

The sequence of scenes makes it seem conceivable to me that the figure of the person lying on the bed represents a healer in the state of the soul journey.

A healer could have used his physical object as a therapeutic aid, for example to support or consolidate success, to calm and protect the client, i.e. to prevent damage. With us, doctors, psychotherapists and patients also know how difficult it is to make a therapy success lasting.

The rigid torso of the person lying does not even have to show a real constriction if it only suggests the ‘lifelessness’, the ‘absence’ of the ‘soul travelers’.          9 jan.2020 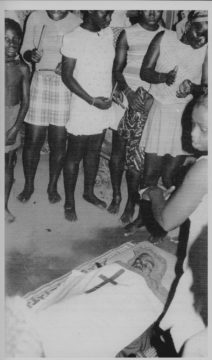 The last of de Rosny’s  illustrations shows a “nganga” (healer) wrapped in a closely fitting cloth. Title: “Nganga”  being away (travelling)

There are two links within my Blog about witchcraft: Zoé Strother and Pierre Petit (LINK 1) (LINK 2) about Pende and Luba (both as German versions)

It might have been one of the many magic objects sold on account of the death of a healer in Songyeland which he had accumulated during practice in his spiritual ‘fortress’ during in the center of his home. ( cp. de Rosny for Duala healers)