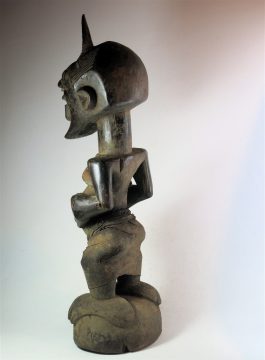 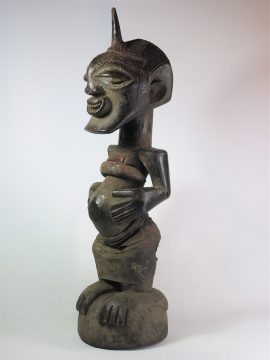 I decided fast in the midst of the other figures. Everything important is big and clear, indeed beautifully worked out. At no point the sculpture is crippled or stunted; nothing in it is a stopgap.

There is no decorative hatching except the tower hairdo and the powerful eyebrows, even on the hairdo it is only executed in the front view (see no. 38).

Flowing forms are contrasted by blocks.

Especially the head shows perfect edges, those at the hands and feet are vivid,  no compulsory exercise! 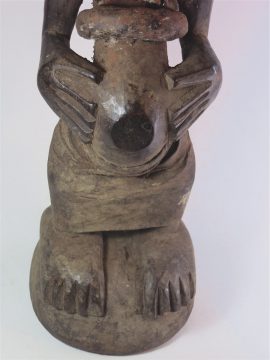 Directly below comes a coquettish female body, beginning with tiny little breasts (see no.39) and a small medicine ring (open at the back), with a large umbilicus (nos. 6, 26, 31 and others)  and belly. The girdled backside is expressive. A tight leather skirt stretches over her knees – in itself a work of art not a shred that would disorderly cover the feet.

Hands and feet are large and expressive (see nos. 30-33), without appearing affected (as in no.16). The soles of the feet do not claw in, but almost enclose the rounded base (no. 36, …). The oversized feet with the notched toes have visible support by the curvature of the plate, they play with, they are not weak like Luba, Kusu etc. feet. Do extremely large feet reveal humor? – as  the grotesque neck support in Kerchache / Paudrat: Songye Fig. 725? The hands have long fingers separated by v-shaped long incisions.

A self-confident piece of work in the middle of the region’s or even the workshop’s own style.

The virtues of the style are freely realized. Neyt has declared his no.39 to a prototype for the

style II. My figure is also one, but not so strangely blackened and not covered with new apron. The angular firmness of the figures is ‘kalebwe’, but to that the artistic liveliness is added. Does this have anything to do with the fact that the Songye are ‘children of the Lulua’ in the realm of Lunda?

Not too pleasing, in general the square-shaped is not abandoned. Instead, the individual elements are heightened up to the caricature. The hands for example are formed like a rake to intensify the  the affect of the belly. And do  the extremely miniaturized breasts not boost the power of its arch?

The navel describes a flat circle like a coin. Other figures cannot keep up with.