A delicate double figure of a land chief, 32 cm high. Dark patina shining red on the edges, dense wood. Condition: Good. It was part of a family treasure. I cannot say how old, as Mobutu since 1965 has modernized and solidified the rights of those who traditionally possessed the ground. A remarkable resistance to the German climate points to an earlier date of making. 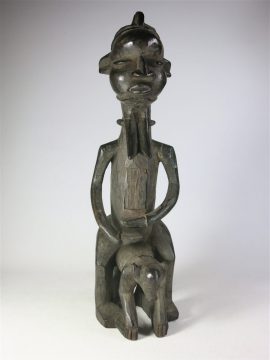 “Mbala, Province Bandundu” is the given provenance. The approximately 60,000 Mbala settle between northern Yaka, Suku, Kwese, Pende and Tschokwe from the lower Kwango in the north up to the upper Kwilu in the north East. The real conditions are much more mixed (Jacques Denis: Les Yaka du Kwango, 1964) 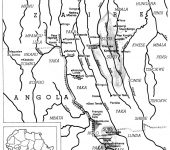 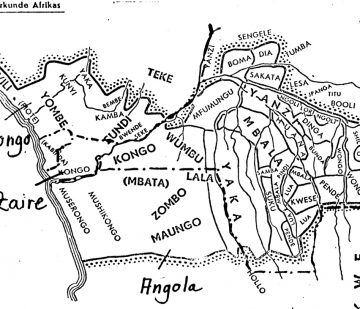 L. Felix: 100 Peoples of Zaire and their Sculpture, 1987 p.102) sums up the section on style: Mbala figures are often confused with those of their neighbors. Mbala figures are anecdotic, clear ‘and soaked with red tukula pigment. The headdress gives an upright comb.

It is a dignified figure with a cap and jacket, bearded, with a stately necklace, a medical cabinet, a meaningful gesture. He is riding  a leopard. The small power object, which is kept in family treasures and shown on certain occasions, demonstrates in detail what it means.

Mbala to be confused with neighbors? – Sure, this time with the style of the Northern Yaka:

This begins with the typical Yaka head: protruding forehead, narrow bean eyes, chief ‘s cap, barrel-form ears, the style of the chin, but also the arms, which look like sausages, a to be seen in Herreman: To Cure and Protect , ill –  there we see corresponding cuffs too.

In the north, the figures and masks ( Lukula , ill.136 p.147) of the Yaka and Suku have veritable hooked noses with neat nasal wings and pouted or pursed mouth.

Such a single example is usually not satisfying. Above all the overall impression can deceive. 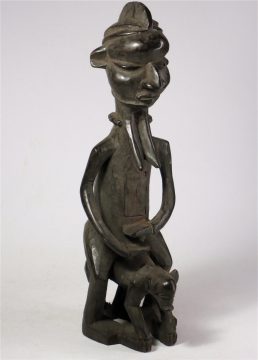 Arthur Bourgeois ( Art of Yaka and Suku, p . VIII) shows a suitable portrait of a land chief wearing the power insignia: beard, hat, necklace, jacket, and the hide of a leopard. 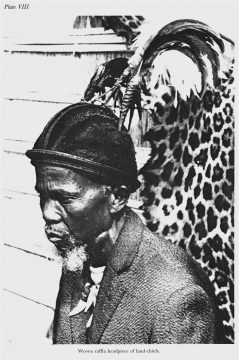 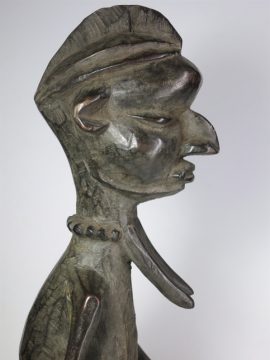 The dealer quotes a proverb from the Congo concerning the necklace of such long teeth of respectable animals which we see on field photos again and again:

“The elephant does never put down his heavy tusks.  That means: “To fulfill chief’s duty no matter how hard it is.

We see long upright ears and long tail. Allan F. Roberts comments in Animals in African Art  p.166: …. One of the most often portrayed animals in African Arts. Leopards are often regarded as animal-others (‘the second ego’) of chiefs, …. Charged with maintaining law and order. And he quotes p.166 a Yoruba praise poem :

His tail plays on the ground while he crushes the skull.

Beautiful death who puts on a spotted robe when he goes to his victim. 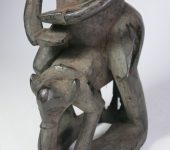 Try it yourself out. Do you feel the energy of the belly and that you involuntarily concentrate it? This applies to Central African sculptures – from Bakongo to the Songye – for the navel, and even more so for a magical charge of the area. 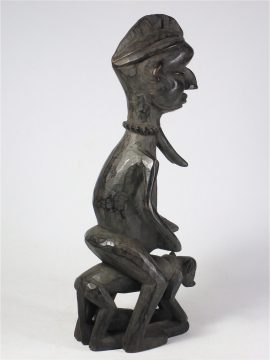 Except for the dramatically protruding two animal teeth, all elements are securely connected. The construction of the lively figure is discreet. The stability is caused by narrow ledges, which are partly disguised as hind legs of the leopard and are hidden a bit by the feet of the rider. The space between the front legs remains free up to the rear of the tail reaching the ground.

The surface was smoothed with the chisel and sanded with rough leaves. The result is humped, as if covered with a net of irregular small surfaces. This produces curved and rounded ridges: the hooked nose and nostrils, the long chin-beard, the almond-eye, the hat in steps, the pearls of the leopard-tooth chain, and the hands of the rider. The long arms, all six legs and the tail form angular arches. The important picture elements are thus embedded in a cubic-fractured surface landscape.

This kind of surface treatment I have also seen in pieces of the northern Suku.

The Mbala are a small people and many of their figures are not recognized as ‘theirs’.

But the number of sculptures that can not be attributed exclusively to one people is great. And on the other hand the formal solutions used are widespread. Unlike in a lottery, however, all lots win. It is fun to turn the table and look at the mixes. Only someone who is supposed to guarantee something to another – a gallery perhaps – gets problems, unless he and his customer have an artistic look and perhaps also sense of humor.